NEW YORK, May 8 (C-Fam) A research group relied upon by politicians and media as an objective source on family planning recently sent out fund-raisers boasting that its work is changing the debate over abortion in Uganda, a country with strong pro-life laws.

The Guttmacher Institute’s two e-mails request donations to help them “generate the data” to prevent “needless death and complications” from abortions in Uganda. They quote the head of a group working to “advance social justice” in Uganda as saying, “Working with Guttmacher has changed the conversation. We have moved from a moralistic and value-laden perspective to evidence-based discussions.”

Maternal deaths in Uganda, including those associated with abortion – are high, but decreasing. Progress is slowed by poverty and insufficient healthcare infrastructure as well as the toll of the AIDS epidemic.

So what evidence has Guttmacher found that is so compelling to change Uganda’s abortion laws?

The emails highlight a study from 2013 in which Guttmacher researchers quantified the costs to individuals and households from complications of abortion in Uganda. They attempt to demonstrate that “unsafe” and often clandestine abortions have far-reaching costs beyond deaths alone.

Most women reported negative effects on their productivity, care for their children, and household finances. Since the women were recruited for the survey on the basis of having suffered complications requiring medical treatment, these findings are unsurprising. That the impact was harder on poorer women was likewise predictable, and any study would likely find similar results for women suffering complications from any illness or injury.

While abortion is illegal in most cases in Uganda, there are some murky exceptions. The authors of the Guttmacher study did not directly ask the women if they had undergone elective abortions, legal or otherwise, citing pervasive stigma. Instead, they used a scoring method developed by the World Health Organization to classify the women’s pregnancy losses as spontaneous or induced – meaning that some of the women’s complications likely resulted from naturally-occurring miscarriages.

Although Guttmacher’s data purportedly shows the personal and household impact of abortion in Uganda, it omits several other important facts. They recommend expanding access to contraception, yet data from another Guttmacher publication reveals only 7.6% of women with a so-called “unmet need” for contraceptives in Uganda cite lack of access (which is less than the African average of 83%), and only 1% of them cite lack of knowledge (lower than the African average of 6.1%).

Even if contraceptive prevalence were to rise, deaths from pregnancy and childbirth remain a major problem in Uganda, it has a maternal mortality ratio of 360 deaths of mothers for every 100,000 live births, compared to 230 across developing countries and 16 in developed countries. 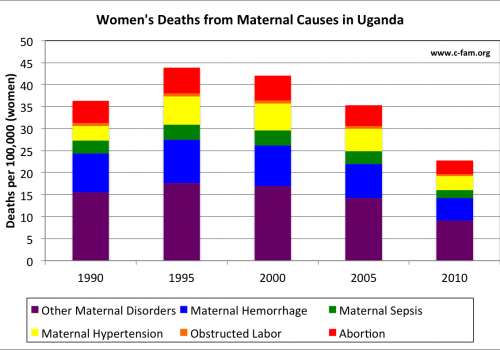 Data from the Institute for Health Metrics and Evaluation show that maternal mortality is falling in Uganda, despite the exacerbating effects of HIV in the 1990s, and that all causes are decreasing proportionally. In fact, abortion as a subset of maternal mortality has remained relatively steady across recent decades.

Much work remains to be done for women’s health in Uganda, and proven interventions such as strengthened healthcare systems, clean water, and good transportation will improve conditions for all Ugandans, including pregnant mothers. But as to whether donating to the Guttmacher Institute will assist in the process, the evidence is unconvincing.