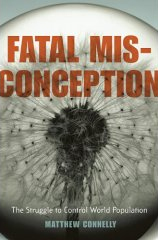 Part I: Power, Money, and Science Unite to Exterminate the World’s Poor

(NEW YORK – C-FAM) A book recently published by Harvard University Press explains how eugenics united some of the richest and most powerful elites of the twentieth century into a movement “to remake humanity by controlling the population of the world,” answering to no one and bringing untold misery upon the world’s poor. The book, “Fatal Misconception: The Struggle to Control World Population,” was written by Columbia University historian Matthew Connelly and shows why today’s reproductive rights advocates are “faithfully reciting a eugenic catechism without the faintest idea where it comes from or where it can lead.”

In 1952, at a secret, invitation-only gathering in Colonial Williamsburg, John D. Rockefeller III brought together what would become the modern population control establishment. Setting the agenda for the following decades were the heads of the United States Atomic Energy Commission, National Academy of Sciences, and top scientists “from embryology to economics,” including past and present Nobel Prize winners.

From verbatim transcripts of the “Conference on Population Problems,” just one of the countless number of such meetings the book exposes, Connelly found that what drove them were the questions of how many people the world could hold along with “whether ‘industrial development should be withheld’ from poor, agrarian countries like India.” By decreasing mortality and encouraging “breeding,” development would increase inferior populations and further degrade “the genetic quality of the human race.” They decided radical measures to reduce birthrates were justified in order to save “Western Civilization” from being dragged down by the growing humanitarian demands of Third World countries.

Thus was born the Population Council, which would in turn become the nexus of the entire population control movement, going on to coordinate the work of the United Nations, the Ford and Rockefeller foundations, International Planned Parenthood Federation (IPPF) – founded three weeks later – as well as major pharmaceutical firms.

The founder of IPPF, Margaret Sanger, selected for its first director general the psychologist C. P. Blacker, who called for a strategy of “crypto-eugenics,” saying “you seek to fulfill the aims of eugenics without disclosing what you are really aiming at and without mentioning the word.”

When Nehru presented India’s first population-limitation policy in December 1952, the population establishment found a willing government that would allow them to start experimenting on its people to find a cheap contraceptive “to be used in poverty stricken slums, jungles and among the most ignorant people,” as Margaret Sanger put it. Years later, Planned Parenthood would import the experiments back into poor neighborhoods in the United States. Sanger said, “I believe that now, immediately there should be national sterilization for certain dysgenic types of our population who are being encouraged to breed and would die out were the government not feeding them.”

According to Connelly, it wasn’t until President Lyndon Johnson, prodded by a few highly influential advisors, that American funding soared, turning Sanger’s vision of forcing birth control on the world’s poor into reality in India and beyond. As the initiatives gained unstoppable momentum, the brutal consequences shocked even the most enthusiastic population controllers.

Pro-LGBT Governments and U.S. Clash on Campaign to Decriminalize Homosexuality