NEW YORK, September 26 (C-Fam) Global leaders were a rare sight in the newly renovated General Assembly hall at the commemoration of a landmark UN conference that triggered the abortion wars at the UN. 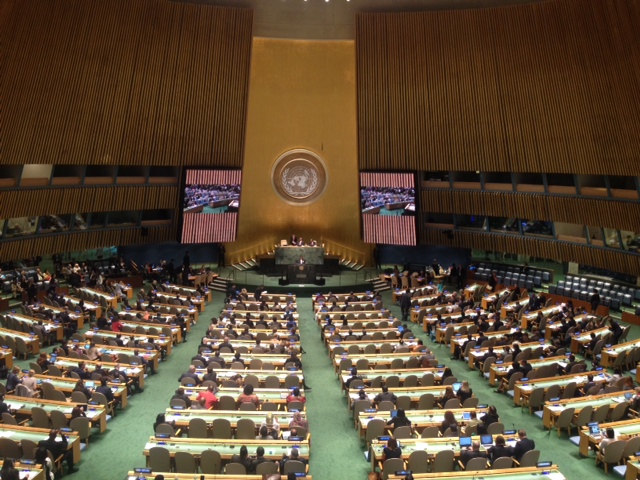 Even though the audience was sparse all day, the special event was shut down at midnight with dozens of delegations, including the United States and Russia, still waiting to speak. Brazil scolded the chair for giving the floor to International Planned Parenthood Federation and other groups instead of member states. UN bureaucrats also reportedly clashed behind the scenes on whether to continue the meeting into the next day.

The reproductive rights establishment, led by the UN Population Fund, spent two years building up the event. But world leaders it intended to attract did not show up.

President Obama was among those skipping Monday’s special session of the General Assembly on the 20-year anniversary of the 1994 International Conference on Population and Development in Cairo. The conference rebranded population control programs backed by wealthy countries as “reproductive rights” and committed countries to expending national resources to lower fertility, alongside dealing with other non-controversial development objectives.

The handful of presidents who attended the celebration highlighted challenges to development, education and ending poverty, but for the most part downplayed reproductive rights.

Chilean President Michelle Bachelet—a favorite of women’s groups—focused on poverty eradication and climate change. The former head of UN Women did not mention reproductive rights at all.

Bolivia’s president Evo Morales, speaking for the 132 member Group of 77, re-asserted key caveats in the Cairo agreement that infuriate reproductive rights advocates. He said foreign and UN aid can never be subject to “conditionality” Morales said. Development strategies “must be guided by [receiving] countries,” and take into account the “conditions, requirements and priorities” of developing countries. This was a pointed reference to the tendency of rich donor countries to tie development aid to the acceptance of radical social policies like abortion.

While Morales praised the Cairo agenda, he seemed to belittle the agreement as merely a “stepping stone” toward the Millennium Development Goals— which included maternal health but not reproductive health and rights.

Many speakers highlighted maternal health—an area of the Cairo plan lacking results. The UN Population Fund and others implementing the Cairo agenda have concentrated heavily on reducing fertility through expenditures on contraception, to great effect. Only Africa retains fertility levels higher than 2 children per woman, and that has more to do with culture than the availability of contraception. Only 1.8% of married women in Africa cite lack of access to contraception as a reason for not using it. But maternal health lags behind.

Eastern European countries spoke of the challenges they face because of low fertility, like aging populations, shrinking workforces and underfinanced welfare commitments.

The problem is not population growth,” said Gastone Browne, Prime Minster of Antigua and Barbuda, but the obstacle to development in his country is global financial institutions. He also complained of the stress put on the “nuclear family” which he called the “basis of all civilizations.”

“We are polluting our oceans, our atmosphere, our cities!” decried Palau’s President Tommy Remengesau. “If our populations stop growing, we can magically improve the human condition, protect human rights, reduce regional conflict,” he said

The General Assembly did not “welcome” a controversial report from the Secretary General that was prepared by the UN Population Fund, a document that mentions abortion more than maternal health. The General Assembly merely “took note” of the report, which is the lowest level of recognition. Several pro-abortion countries tried to salvage the report by extravagantly praising it.

Democrats Seek to Block Religious Leaders from Entering the Country