NEW YORK, August 14 (C-Fam) The UN’s latest demographic numbers are out and show rapid global aging, and a sharp deceleration in population growth that could lead to stabilizing or even falling numbers before the century’s end.

World population is growing more slowly than any time since the UN has collected data, dropping from a 1.24% increase 10 years ago to 1.18% in this year. The trend is global, including a sharp decrease in Africa.

Where childbearing cohorts are small, such as in Europe, there will be little or no growth. No European country is expected to regain a fertility rate high enough to replace its contracting population. Globally, 83 countries showed below-replacement fertility during 2010-2015. In 25 of those countries, fertility was “very low,” under 1.5 children per woman.

By 2050, 48 countries will see their populations shrink. Half of the world’s growth by 2050 will come from just 9 countries: India, Nigeria, Pakistan, the Democratic Republic of Congo, Ethiopia, Tanzania, USA, Indonesia, and Uganda.

Notably, population is growing because people are living longer. The highest increase in longevity has been in Africa, adding 6 years to the average life span during the last few years. Globally the increase has been three years. More children are surviving until their fifth birthday. The largest drop in child mortality came in Africa.

Longer lives and falling fertility rates brings rapid global aging. By 2050, all major areas of the world except Africa will have nearly a quarter or more of their populations aged 60 or over.

“Countries with a relatively high ratio of working to dependent populations have the possibility of benefitting from a ‘demographic dividend,’ provided that appropriate labor market and other policies allow for a productive absorption of the growing working-age population and for increased investments in the human capital of children and youth,” the report advises. 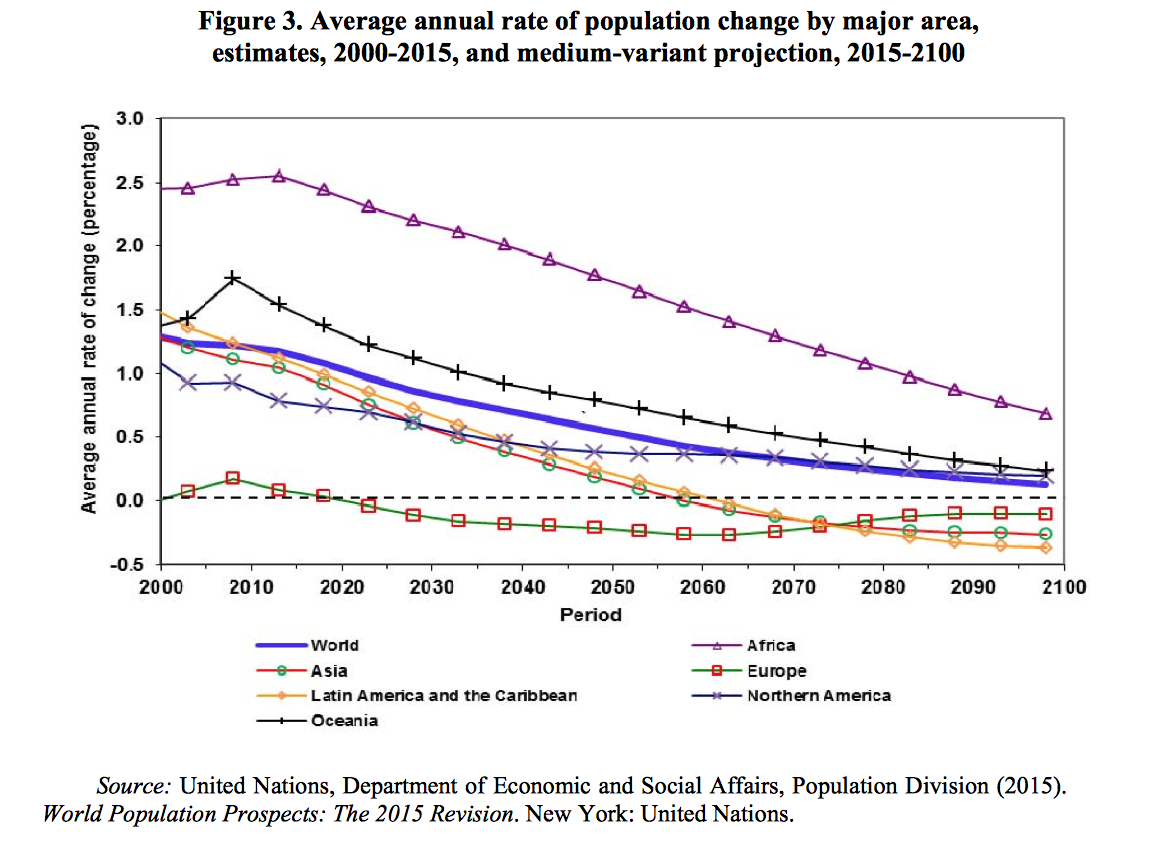 African countries are at an advantage with almost 13 workers to support each dependent person aged 64 or older. By comparison, Asian countries have 8, Latin America and the Caribbean 7.6, Oceania 4.8, Europe and Northern America fewer than 4, and Japan just 2.1 workers per retiree. In a seeming disconnect from the data, the report inserts a warning to Africans that its relatively large family sizes will make it hard to “eradicate poverty and inequality, combat hunger and malnutrition, expand education enrollment and health systems” and implement the “sustainable development agenda” and then calls for more “reproductive health and family planning.”

In China, where four decades of family planning has led to steep fertility decline, the working aged population began to contract five years ago. The UN report shows India overtaking China in population by 2022, a full 6 years sooner than its last demographic iteration in 2013. Foreign policy expert Gordon Chang said that while Beijing has “already pocketed” its demographic dividend, India’s demographic profile is “close to perfect” and that New Delhi’s challenge is to “step out of the way of its ambitious, talented, and restless people, removing legal, institutional, bureaucratic, and social barriers.”

Demographers have criticized the report’s methodology because its projections do not account for country-specific circumstances and assumes fertility “convergence”.

For example, Japan has a fertility rate of 1.3 children per woman, but the UN estimates that will increase to 1.81 by 2050, reaching the same rate as Jamaica and Botswana, without explaining how this unprecedented turn-around could occur. It projects world population will reach 8.5 billion in 2030, 9.7 billion in 2050, and 11.2 billion by 2100. It says there is a 23 per cent chance that population will stabilize or begin to fall before 2100.